Bitcoin Revolution – Was the software on The Dragons´Den?

Earn money from cryptocurrencies without having your own expertise? This is possible with crypto robots like Bitcoin Revolution – at least in theory. Despite the many promises made by the operators, no beginner should assume that they will be set for life in no time.

Rather, it is worth taking a look behind the many advertising measures, some of which have gone a little off track.

For many prospective investors, the question arises whether the software can really guarantee such high profits, whether the developers actually auditioned for “Dragons’Den” and whether numerous celebrities invest in the app as advertised. We have tracked down the answers to the most frequently asked questions.

Mankind’s greatest inventions first had to be thought up. More than that, it took people to believe in them. This is precisely where “Dragons’Den” comes in.

In the German entertainment show, which has been on air since 2014, inventors, start-ups and company founders present their supposedly clever ideas.

In doing so, they have the opportunity to convince the so-called “Dragons” to ask for venture capital at the same time, so that idea and company can mature to the same extent.

If the team of experts around Carsten Maschmeyer is convinced, nothing stands in the way of financial support. Clearly, then, a software like Bitcoin Revolution may also need the additional income. 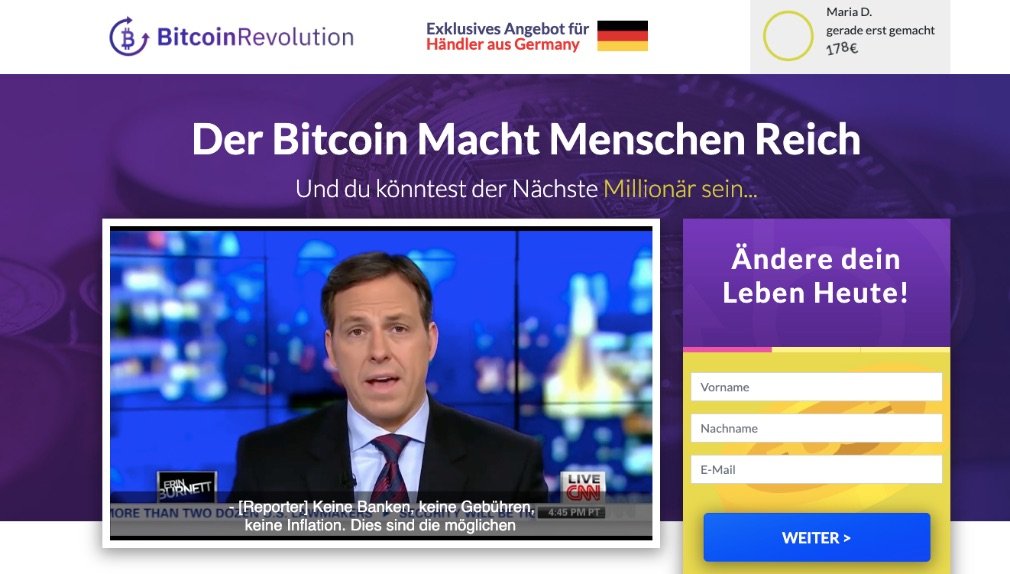 Was Bitcoin Revolution advertised on “Dragons’Den”?

The answer seems obvious: yes. After all, via Facebook, Google or other advertisements, there are repeated references to the operators introducing themselves and offering their software for sale.

However, there is clear talk of a Bitcoin Revolution fake. In the seasons broadcast so far, the topic of Bitcoin has not been discussed even once.

Neither Bitcoin Revolution nor any other software has received an upward thumbs-up from Carsten Maschmeyer or his colleagues. This may very well change in the future.

But at this stage, it is a far too aggressive promo – attempt that can quickly be exposed as fraudulent.

Which celebrities are investing in Bitcoin Revolution?

It’s hard to say. After all, even celebrities who have already amassed wealth are always on the lookout for new investments that are as risk-free as possible. Accordingly, it would not be surprising if many a famous name actually speculated with Bitcoin Revolution.

But anyone who seriously believes that Günther Jauch, Lena Meyer – Landrut or Oliver Welke have voluntarily given themselves up for advertising is very much mistaken.

Many celebrities have recently announced on their social media channels that they have never heard of a software like Bitcoin Revolution, much less cooperate with it. Once again, we have to assume a fake that belongs in the realm of legends.

The advertising is irregular and dishonest.

Jordan Belfort
Jordan Belfort is known for being the Wolf of Wall Street, where he used to be a trader. He’s one of the best sales trainers in the world.
Leave a commentCancel reply
Related Articles
Bitcoin Code – Was the software on Dragons’ Den?
Cryptocurrencies have gone from insider tip to ubiquitous standard. The Bitcoin issue alone has kept the investment world on its toes for years. And rightly so: those who invested in time are now millionaires. This raises the question of whether ...
Bitcoin Trader – was the software used on Dragons’ Den?
Bitcoin Trader is a software that makes it very easy for users to trade on the digital currency market. This is nothing new, but there are always a few innovations that are incorporated into this software that have not yet ...
Bitcoin Revival – Was the software on Dragons´Den?
If a product makes it to the Dragons’ Den show, you can assume that it is a very good product. Bitcoin Revival is said to have been there, according to reports on the internet. However, there has been no comment ...
Cryptosoft – Was the software at Dragons’ Den?
Cryptocurrencies are the trend of the hour. Those who invest in time could, with a bit of luck, be set for life in just a few years. Bitcoin is the best example of this. In the meantime, interested parties who ...
Krypto-Bewertungen